GBP/USD Bulls move in for the kill, targeting a significant upside correction

The US dollar and global growth have been the main focus at the start of the week with China releasing downbeat April activity data. The disappointments fuelled a bid in the greenback after the Chinese yuan came under pressure and weighed on risk-related currencies, including the pound. However, the greenback has been mixed vs. its G10 rivals in the main.

The US dollar index (DXY) was last down 0.08%, after having briefly crossed the 105 level on Friday, a 20-year peak. Weekly positioning data showed investors built their long dollar bets. Speculators’ net long USD index positions edged up to the highest levels since mid-February. "Haven demand for USDs combined with expectations for progressive Fed rate hikes this year suggests the USD has the potential to remain well supported for some time," analysts at Rabobank explained.

Meanwhile, there will be more key data events for the week that will include April readings for US Retail Sales and Industrial Production on Tuesday, Home Construction on Wednesday and Existing Home Sales on Thursday.

"We look for Retail Sales to advance firmly in April (1.5%), continuing with the monthly gains registered so far this year," analysts at TD Securities argued. "Spending was likely aided by a strong rebound in auto purchases and an increase in control group sales. We also look for a 1%+ MoM gain in the eating/drinking segment (i.e. bars & restaurants) as consumers continue to transition away from goods spending."

Fed speakers are also a theme for this week and markets are looking for more reassurance that the Fed will move cautiously in its fight against inflation rather than act with large rate increases of 75 basis points.

Domestically, the focus will be on Headline Inflation readings and this is set to surge on the increase in the energy price cap and VAT changes in April. "We look for the headline rate to soar to 9.2% YoY and core inflation to come in at 6.4%. The labour market likely remained tight, with the unemployment rate staying put at 3.8% and ex-bonus and headline wage growth coming in at 4.1% and 5.3% 3m/y respectively," analysts at TDS said.

As for positioning, net short GBP positions increased for a tenth consecutive week as concerns about the cost-of-living crisis rise in the UK. The BoE has hiked rates to 1.00% and is signalling that more is to come. However, despite the inflationary risks, MPC members are increasingly concerned about the UK growth outlook.  This suggests the potential for a relatively short window for interest rate hikes. The Bank of England's next meeting is scheduled for June 16, when another rate increase of 25 basis points is expected.

Brexit-related developments may end up generating more downside pressure on the British currency. Boris Johnson is flying to Belfast to try to sort out the consequences of a Brexit deal he signed. The UK is saying it will have to take unilateral action to override part of the Northern Ireland Brexit protocol unless the EU shows the “requisite flexibility”. The EU has said it believes a deal can be done but only through negotiation, so all ears are to the ground as to the progress, or there-lack-of, for the days ahead. 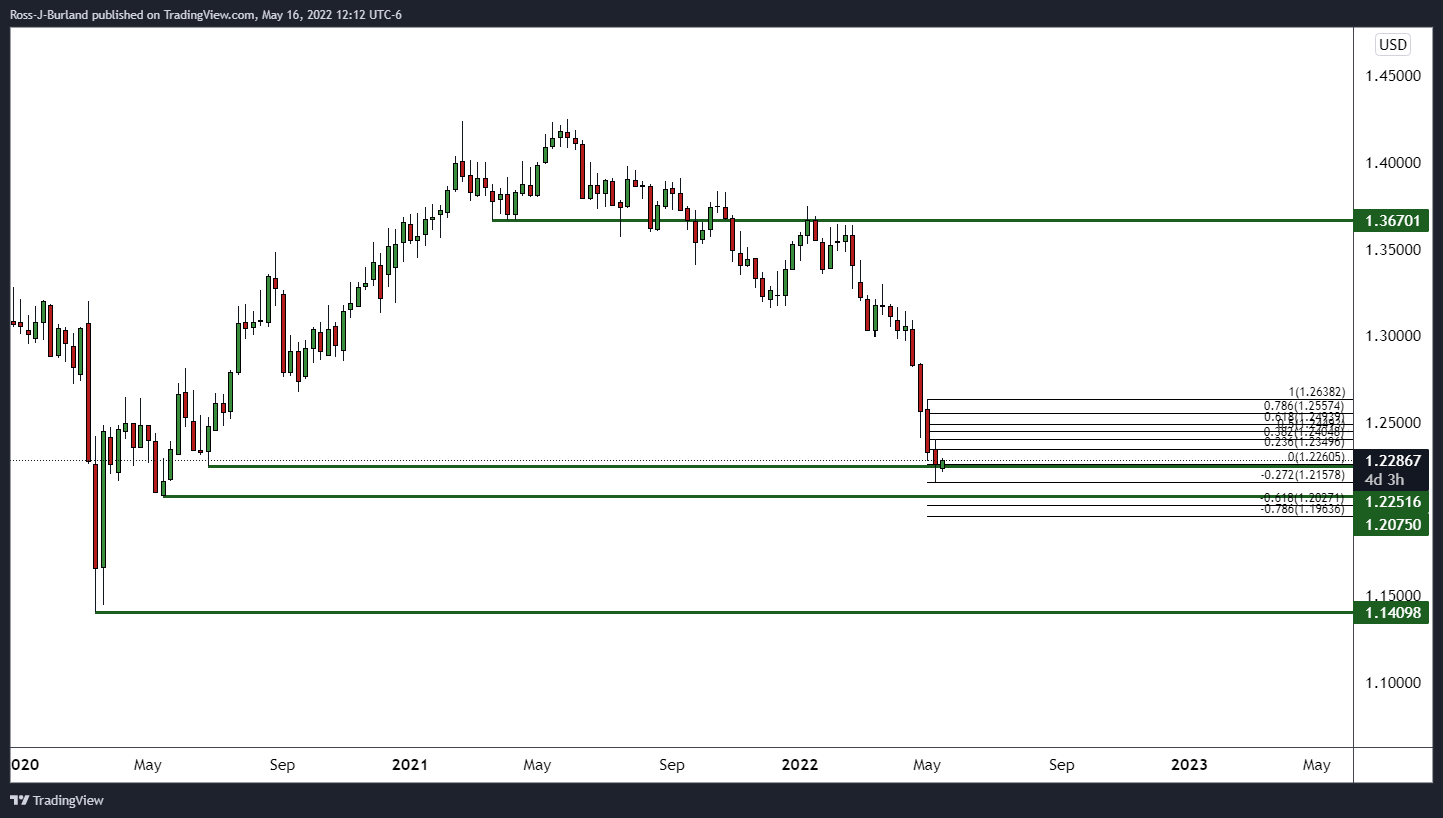 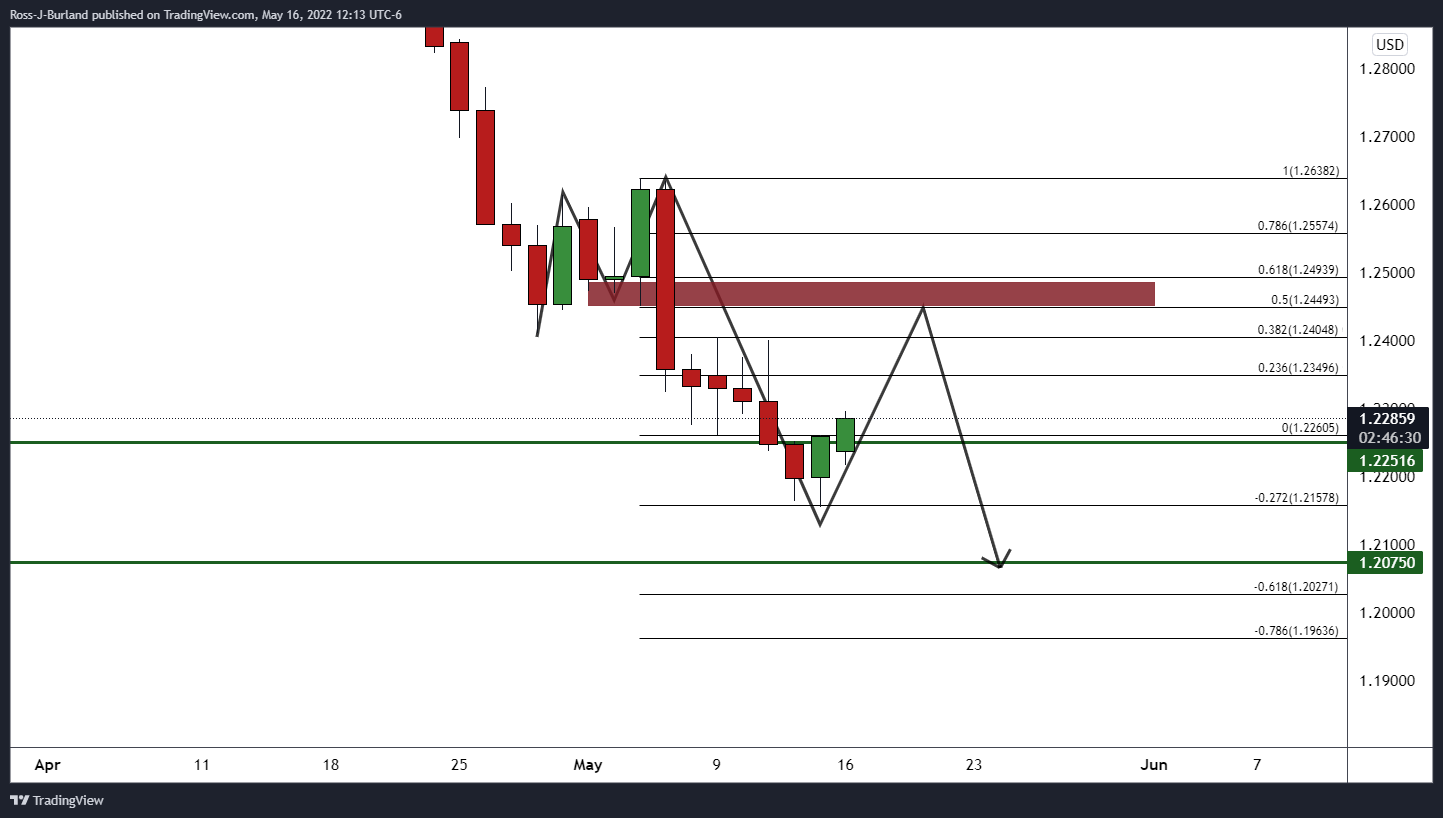 From a daily perspective, the price is reverting in the M-formation and the 1.24 figure could come under pressure that guards the 50% mean reversion mark at 1.2450 that meets the neckline of the formation.